Rarely does an NCAA Championships feature the consensus two best swimmers in the world in their respective event, but that will be the case for the 2022-23 season as Leon Marchand, the Frenchman who won world titles in the 200 and 400-meter IM this year, is a sophomore at Arizona State University while Carson Foster, the silver medalist in both of those races, enters his junior season at the University of Texas. The Sun Devils and Longhorns are not slated to face each other in a dual meet or invitational this season, but every swim by either swimmer will be a precursor to the much-anticipated March showdown at the NCAA Championships in Minneapolis.

The 2022 NCAA meet was the first sign of a world-level breakout looming for Marchand. In the 200-yard IM final, he blew away the field on the breaststroke leg and powered to a mark of 1:37.69, the fastest time in history by almost a half-second (breaking a mark previously held by Caeleb Dressel). The next day, Marchand finished second in the 400 IM in 3:34.08, and he added a second individual NCAA title in the 200 breaststroke, coming from behind to outduel Max McHugh. His 1:48.20 in the breaststroke was just three tenths off Will Licon’s all-time record.

Foster, meanwhile, has never put together a performance matching his capabilities at the NCAA Championships. Last year, he fell to a surprising sixth in the 200 IM (2.5 seconds behind Marchand), and after he swam his best time in the 400 IM prelims (3:33.79), he was two seconds slower in the final, completely gassed from his morning swim. Foster later called the mistake “an immaturity thing. I did that completely on purpose.” He added, “My emotions kind of got the best of me that day.”

But when Marchand and Foster met again two-and-a-half months later across the world in Budapest, Foster did not leave with the same sense of disappointment and underperformance. He had recorded the best swims of his life at his first long course World Championships while racing against a truly elite force in Marchand.

In the 400 IM Worlds final, Marchand flirted with Michael Phelps’ world record on his way to a time of 4:04.28, the second-quickest mark ever recorded, and while Foster was left in his wake, he still posted a time of 4:06.56, a best time by two seconds and good enough to make him the eighth-fastest performer in history. Four days later, Foster was closing the gap on Marchand down the stretch in the 200 IM final, and he ended up just a half-second behind, 1:55.24 to 1:55.71.

The next matchup between the two will come on the college level, with points for their respective squads at a premium. The records — Marchand’s 200 IM mark and Hugo Gonzalez’s 3:32.88 in the 400 IM — will surely be threatened. Those races are a full five months away, but until then, we will follow their every move, trying to make sense of both swimmers’ form in advance of the next showdown in a budding rivalry.

This college season, Marchand vs. Foster will be the show-stopper, but plenty of other already-intriguing showdowns await at the end of this season. We previewed the top women’s races last week, and here’s what else to keep an eye on for the men.

An epic four-way race at last year’s NCAA Championships saw early leader Kieran Smith fall off the pace with 150 yards to go while Georgia swimmers Matt Sates and Jake Magahey surged to the front to produce a 1-2 finish for the Bulldogs. Sates left college swimming after one semester, and Smith has also turned pro, but this year’s race will bring back Magahey, the 2021 champion in the event, along with third-place finisher Luke Hobson. Magahey ranks seventh all-time in the event at 4:06.71, and Hobson is tied for seventh at 4:08.42.

Both men are coming off excellent summer seasons. Hobson, a sophomore at Texas, was the U.S. national-title winner in the 200-meter free, while Magahey held off Jake Mitchell to win the national title in the 400-meter race. A resurgent Mitchell, who was a 2021 Olympic finalist in the 400 free, has the skills to vault his way into the mix in this event, and Florida’s Trey Freeman and NC State’s Ross Dant are also among the best 400 freestylers in the country, with Freeman placing second at the International Team Trials in April and Dant ending up third. Florida’s Alfonso Mestre, Stanford’s Preston Forst and Texas’ David Johnston also potential spoilers here.

A great strategic race in the 500 free is a treat for swimming nerds as competitors utilize different strategies, pushing themselves from the start, building throughout the race or waiting for a particular point to make a move. It would be no surprise to see more lead changes as the eventual NCAA final unfolds. But in the meantime, let’s see who can record some elite times, particularly during the flurry of midseason invitationals, and put themselves in contention for March. 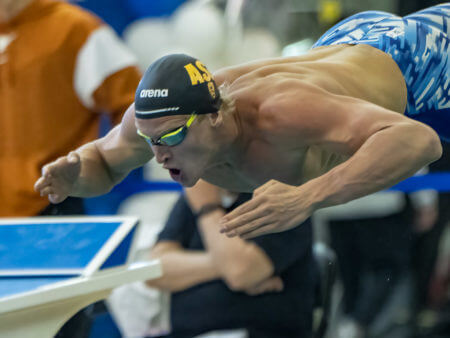 The 200 free also loses some talent from last season with national champion Drew Kibler having moved on from college swimming along with Smith and Sates, but a high-octane final is already in the works. The two most aggressive swimmers in the field last year will both be back: Arizona State’s Grant House and LSU’s Brooks Curry. Curry, better known for his sprint skills, was the NCAA champion in the 50 and 100 free before representing the U.S. individually at Worlds, and he has enough endurance to hold on for a 200-yard race in short course.

House showed significant growth in his swimming career last year as he swam the nation’s quickest 200 free all season with a 1:30.13 at the Pac-12 Championships, and he placed second behind Kibler at NCAAs. He missed out on a chance to qualify for the World Championships when he was 10th in prelims at the International Team Trials, but he would go on to swim 1:46s in the 200-meter free on multiple occasions over the summer.

Speaking of 1:46-level long course swimmers, six of those men are currently swimming for a college team but did not qualify for the A-final at NCAAs last year. Coby Carrozza and Freeman both qualified for Worlds in the 200 free, while Hobson was the U.S. national champion in the event in late July with a quick time of 1:46.14. Mitchell, Magahey and Jack Dahlgren also swam under 1:47 in the final at Nationals. Can any of those guys get more speed in the yards version of the race to reach 1:30-territory?

In yet another event, elite talent departs, but plenty remains. Louisville’s Nick Albiero and Cal’s Trenton Julian both took fifth years last season, but they ended up third and fourth, respectively, in an extremely tight 200 fly NCAA final. The winner of that event was Indiana’s Brendan Burns in 1:38.71, with Georgia’s Luca Urlando just behind in 1:38.80. These two swimmers, who each rely on stellar underwater dolphin kick skills, will be favored again this year, but two potential spoilers loom.

First, Cal’s Gabriel Jett, a sophomore who annihilated his best time in the 200-meter fly this summer as he got down to a 1:54.37 in winning at U.S. Nationals. Jett’s rapid improvement during his time at Cal helped him finish sixth at last year’s NCAAs, just a second-and-a-half behind Burns’ winning mark, and another leap was obvious in his late-summer performances.

The other possible threat here is Foster, who swam the 200 back at NCAAs last year but might be tempted to give the 200 fly a shot after his 1:53.67 in the 200-meter fly this summer made him the third-fastest American ever. Keep an eye on Foster’s times in the 200 fly and 200 back throughout the season to see which lineup makes the most sense for Texas. 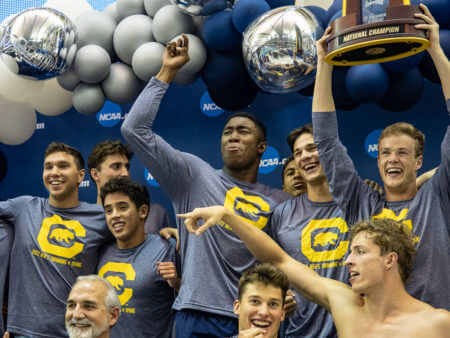 Stop me if you’ve heard this before: the California Golden Bears and Texas Longhorns should battle for the men’s national title. Those two teams have been ranked No. 1 and No. 2 in some order at the end of the season every year since 2014 and every year but one since 2010 (in 2013, when Cal finished second and Texas third behind champion Michigan). With Cal coach Dave Durden and Texas coach Eddie Reese continuing to produce the best swimmers in the country, is there any serious doubt about another Bears-Longhorns battle this year?

In December 2021, it looked like the 2022 NCAA meet would be a Texas runaway, particularly after the Longhorns crushed Cal at the mid-season Minnesota Invitational. But Cal showed steady improvement throughout the second-half and ended up turning the tables in March. This time around, who will be on top: a Texas team featuring Foster, Hobson and Caspar Corbeau or Cal’s group led by Jett, Bjorn Seeliger and Destin Lasco?

We will get a sense as the two teams work their way through their respective schedules, but it’s worth noting that Cal and Texas are scheduled to meet once again in early December in Minneapolis, a potential national-championship preview in the same pool slated for hosting duties in March.

UFC to ‘expressly prohibit’ fighters, teams from wagering on bouts in updated ‘athlete code of conduct’

The first Gold of Austria!