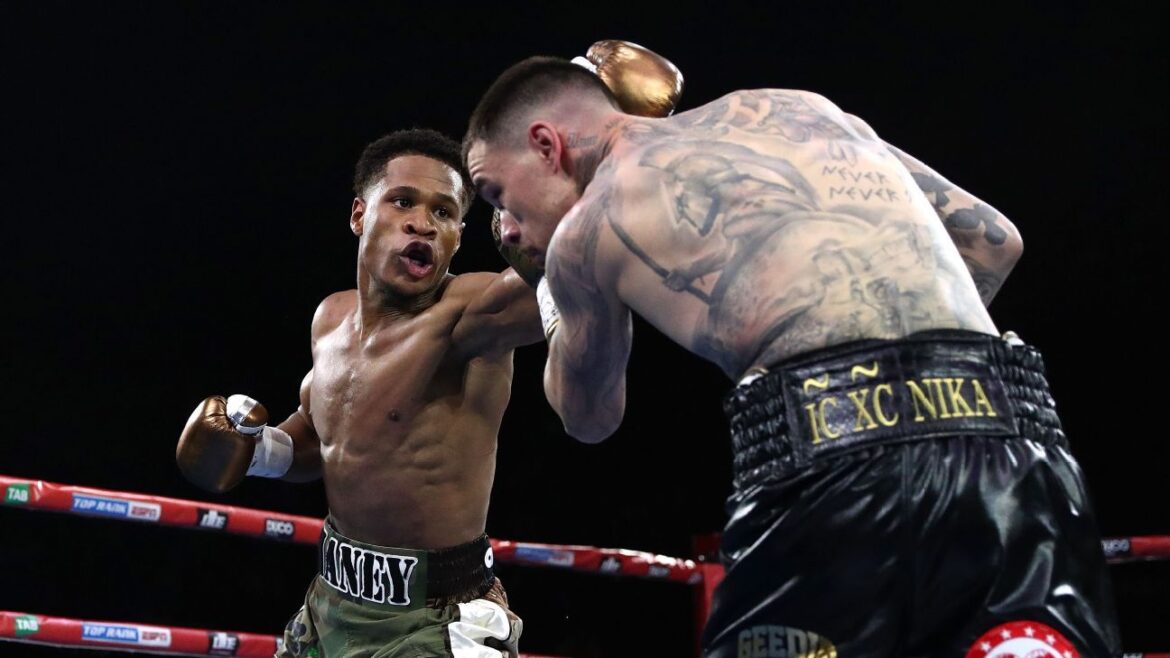 Devin Haney picked up in the rematch where he had left off, with another unanimous-decision victory over George Kambosos to retain the undisputed lightweight championship Sunday afternoon at Rod Laver Arena in Melbourne, Australia.

“I knew he was looking for the jab, so I wanted to show other tools in the arsenal,” said Haney, who owns all four 135-pound titles. “The right hand won me the fight tonight.”

Haney’s jab, one of boxing’s best, was a major key to his victory, but he did fire more power shots in the rematch, including a right-hand lead that met its mark. The 23-year-old from Las Vegas connected on 114 power shots, 45 more than in the first meeting. Haney landed 10 more jabs, too, in another dominant performance.

“I came to Australia not once but twice. I honored [the rematch clause] and beat the man in his hometown twice. … He made every excuse in the book for the first fight.”

There can be no doubt now after Haney (29-0, 15 KOs) picked Kambosos apart from Round 2 onward. The first bout didn’t warrant a rematch, but Kambosos had all the leverage during the spring when the bout was being negotiated.

To land the shot at Kambosos’ four titles, Haney agreed to a rematch clause that, if exercised, would guarantee the Australian an immediate return bout in his home country.

While Kambosos (20-2, 10 KOs) was more aggressive the second time around, he didn’t perform discernibly better. The 29-year-old followed Haney around the ring and was unable to work his way on the inside against the far rangier fighter.

Whenever Kambosos did close the distance, Haney clinched and then made Kambosos pay with counter shots.

By the end of Round 9, Kambosos was bleeding profusely from a deep cut over his left eye and swelling. He was also cut over the right eye from a clash of heads that left Haney with a gash over his right eye.

Haney followed up with his best round of the night, as he attempted to put Kambosos away with a fight-high 34 connects in Round 10.

“I gave everything I had in this fight. I’m very proud of myself,” said Kambosos, who changed his career with a November victory over Teofimo Lopez to claim the lightweight championship in ESPN’s 2021 Upset of the Year. “This guy’s a helluva fighter … a pound-for-pound top-five fighter in the world. His skills, his movement. He can move up to 140 [pounds] and dominate as well. This guy’s going to be around for a long time. I’m very humble to be in there for 24 rounds.”

Kambosos entered the bout rated No. 8 by ESPN at lightweight, and he could land another title shot once Haney inevitably moves up to 140.

“I have some big, big fights to come in boxing,” Kambosos said.

But first, Haney could defend his four 135-pound titles against Vasiliy Lomachenko in a marquee fight next year. Lomachenko returns Oct. 29 against fringe contender Jamaine Ortiz, and a victory for the former three-division champion should set him on a collision course with Haney.

Lomachenko was in line to fight Kambosos in June before he decided to remain in war-torn Ukraine with his family. That choice opened the door for Haney to vie for the undisputed lightweight championship following a breakthrough 2021 campaign with decision victories over former champions Jorge Linares and Joseph Diaz Jr.

With Kambosos out of the way for good, Haney will now seek new challengers in 2023 and beyond as he continues to make his pound-for-pound case.

What’s next for Alexa Grasso after UFC Fight Night 212 win?

Where Jalin Hyatt ranks nationally for touchdowns after Alabama game

Tyson Fury remains the king of boxing, inside...

Breaking down the trilogies: Who has the edge...

Rivals promise ‘best first round ever’

Fight against Kevin Lerena can be launchpad into...